Does anyone have a modified antenna array template that will cover the 2m ham radio band?

For the 2m band the array will be quite large, not something easily printed on a paper or 3D printed.

Best to use the Excel calculator https://github.com/krakenrf/krakensdr_docs/raw/main/antenna_array/Antenna_Array_Size_Calculator.xlsx. Enter the frequency, choose the largest feasible antenna Max radius, and then use the “Antenna Coordinates for Radius” calculator to get the coordinates of each element.

I punched in the full size 88cm into the antenna array calculator for 145mhz. Is it normal for it to generate an asymmetrical configuration? Just want to make sure before I CNC a custom jig out of a sheet of 1/4" plywood.

Here’s a tool I made from yardsticks for kraken antenna setup. I use .28m to (barely) cover 2m & 70cm. The trick (it’s been 50 years since my last trig class

) was to make the drilled holes relative to the upper bolt, not the center, so only the lower bar has to be moved if you want different spacing. Just an idea…

Here is the template I created for the bands I’m interested in, which includes the 2m and 70cm ham bands and much of the 70cm business and public service bands. Using the spreadsheet, these are the three general ranges I settled on: 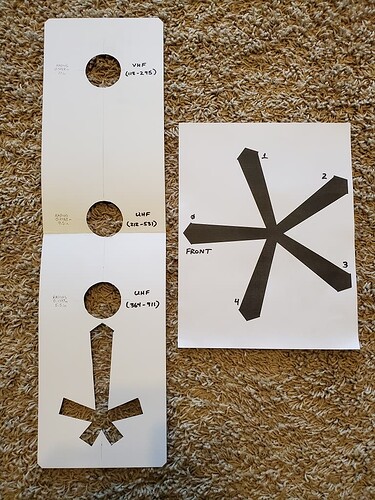 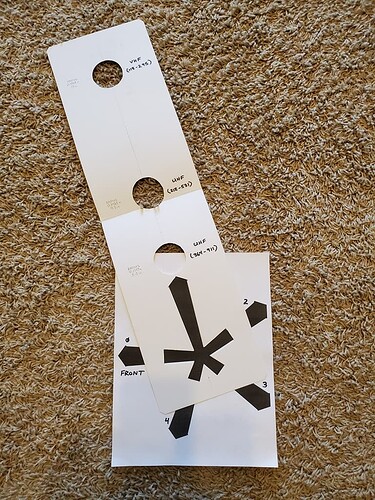 The shape of the antenna array will always be a pentagram with 5-elements, so asymmetrical on one axis.

I punched in the full size 88cm into the antenna array calculator for 145mhz. Is it normal for it to generate an asymmetrical configuration? Just want to make sure before I CNC a custom jig out of a sheet of 1/4" plywood.

I’ve been seeing a bunch of reports from people using the array calculator that claim the array is not symmetrical as expected. I think what you’ll find is that it is not DISPLAYED symmetrically, because the axes of the plot aren’t at the same scale. However if you do the math on the coordinates, it should be A-Ok.

For my array, I used a string with a three loops in it, one at each end and one near the middle.
The distance between the end loops is the array radius + the inter-element spacing from the spreadsheet.
The distance form one end loop to the loop in the middle is the radius. That end is the radius loop. The distance from the middle loop to the other end loop is the inter-element spacing from the spreadsheet. That end is the spacing loop.

It’s harder to describe than it is to actually do.
After the first time, you can set up an array very quickly.
I have strings for 25cm, 45cm, and 60cm radii.
The printed templates are nice, but for people with only wire and string at their disposal, this is another option.

Would you mind posting a picture, please?

The picture shows the loops reversed from the previous instructions, but for that measure, it doesn’t matter. The rest of the steps should match the photos. The yellow line represents the center line and points to the front to show the orientation of antenna 0 as the angle of the photos is different in each shot.

In practice, pulling on the ends in a triangle shortens the distance between the ends and the middle loop slightly. It doesn’t seem to bother the results too much, but if you want to be precise, you could place the elements where they belong and use a slip-knot to calibrate the distance between loops under tension, or use something like a ring or a washer for the middle loop.

The end picture looks like they’re a little uneven, but that’s because I couldn’t put tension on the string and take a picture of it at the same time. Also, I did this on the car’s hood, which is slightly curved. As such, the geometry is slightly off. It all works out on a flat surface.