Hello. Can I write my own client to get the current DOA? What I mean is that there is a web server on Raspberry PI on port 8080, that provides a web interface for KrakenSDR configuration and DOA estimation. And I would like to write a client software for personal use, that will extract the current DOA (the one on the compass on the “DOA Estimation” tab). Can I do that? I mean your web client gets this data somehow, as well as the Android application.

So my questions are:

I have tried monitoring web clients’ requests to the raspberry server using the chrome console, but haven’t seen any queries. I thought that the web client makes a request every N ms to get a DOA and then draws the data on the compass, but apparently, I was wrong.

Is this what you are looking for? 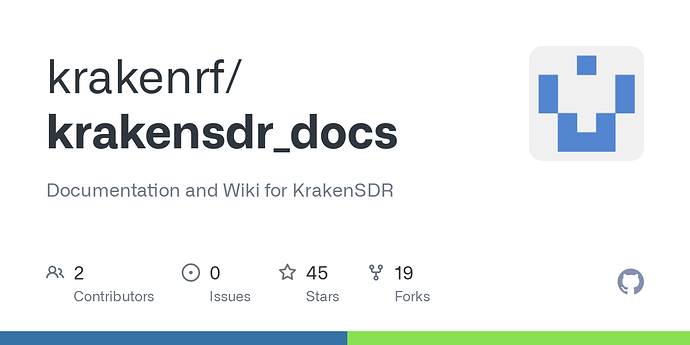 Documentation and Wiki for KrakenSDR. Contribute to krakenrf/krakensdr_docs development by creating an account on GitHub.

When set to the ‘Kraken App’ DOA Data Format the latest bearing data will be output to an HTML page at “http://PI4_IP_ADDR:8081/DOA_value.html” in the CSV format every update period.

The output format CSV ordering is as follows:

If multiple VFO channels are used, each channel will output it’s own unique CSV data from 1-377 separated by a newline character “\n”.