Hello. Yesterday, I made some tests with the static Arrow-made antenna. There are 2 radio repeaters nearby (~160 MHz), and I know the exact location of each of them. Firstly, I told KrakenSDR to listen to the frequency of Repeater1, then I rotated the antenna so that the measured DOA was equal to the expected one, assuming that now the antenna is facing North correctly. Then, I switched to the frequency of the Repeater2 and the DOA was noticeably inaccurate, probably 7-10 degrees more western than it should have been. 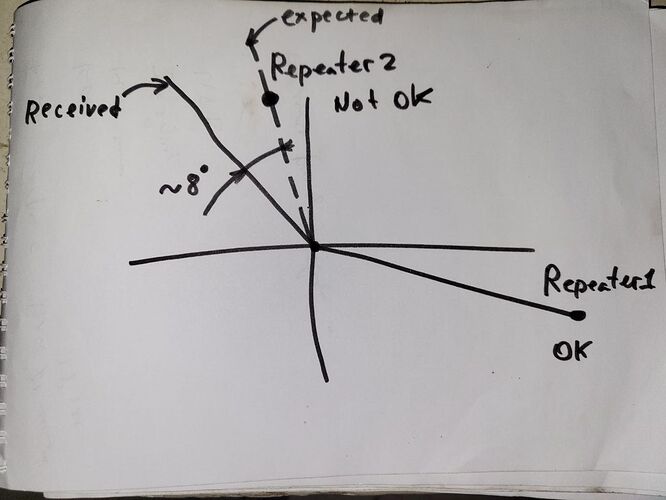 After that, I measured the length of each of the 5 cables (made by Kraken, not Arrow) with my VNA, and according to the measurements, one was 4 mm longer than the others.

Previously, I did the same DOA test with the other set of KrakenSDR, antennas, and cables, and the results were more accurate, probably 4-6 degrees more western in comparison to the 7-10 degrees I got this time. I haven’t measured the cables of that set though.

So my questions are:

Where is the array mounted? The offset is more likely due to some terrain or nearby object multipath effects, rather than the cables. It’s also possible that the metal arms and/or mount on the Arrow array contribute some inaccuracy.

It can be quite difficult to compare arrays because there are so many different things that can affect it. You could test the cable theory by moving the 4mm longer cable to another antenna on the array.

But a 4mm cable difference at 160 MHz should have very little effect.

The max precision is a physics limitation. That can only be improved by using an array (and coherent SDR) with more channels. Although, the 8 degrees written on the excel sheet is only an estimation of the physical limit as the limit mostly depends on the environment.

@DrunkP What value is written on each of the cables?

If I minimize the terrain effect, for instance use a really tall mast or building, will the accuracy be better than 8 degrees? Or 8 degrees is the best possible result with the current 5-channel hardware, and terrain effect may only worsen it?

The resolution is based on the Rayleigh resolution formula, then divided by a ‘rule of thumb’ value of 10 for super resolution algorithms like MUSIC. So it’s only a rough estimate.

I should clarify, the values in the excel are the resolution, which indicates the max angle that two sources can be determined. If two sources are within that resolution angle they will appear as one source. But because of multipath and scattering the resolution it also heavily affects accuracy of 1 signal.

I’m not sure if there is a way to get a more accurate estimate of accuracy, possibly only with some simulation.

I put the antenna 10 meters higher and accuracy has noticeably improved. Thank you

Where can I find this excel sheet?